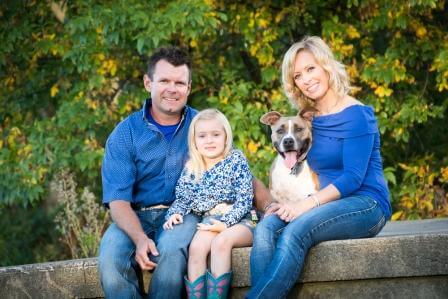 Born and raised in Stuttgart, Germany, Robin began riding at eight-years-old. Since English riding is more common in Germany, Robin started out riding English horses and even learned vaulting. After participating in a western horse camp, however, he found his love of western riding and never looked back. Throughout high school, Robin continued to ride and spent all his spare time learning all he could. After high school, he went on to earn a degree in horse science and took a position working for German reining horse trainer, Volker Schmitt. 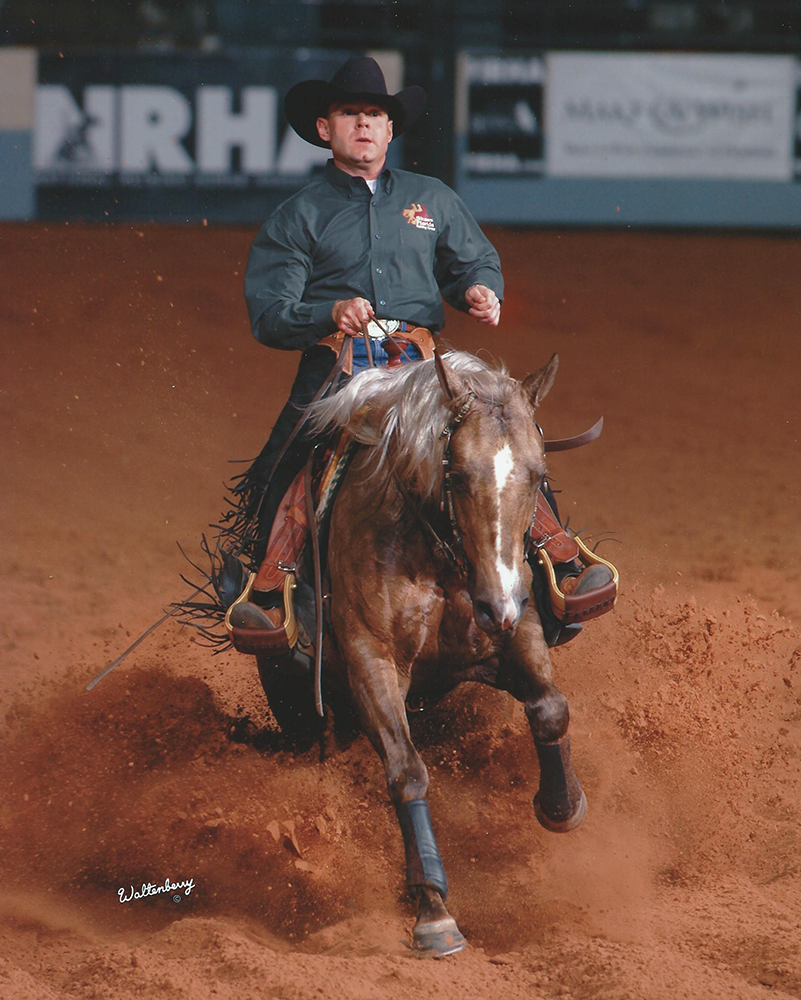 In 2004, Robin moved to the U.S. to work for the NRHA’s All Time Leading Rider, Shawn Flarida, in Springfield, Ohio. His strong work ethic and dedication to learn all he could from Shawn helped him quickly earn the opportunity to show and in 2005 Robin won the All American Quarter Horse Congress Limited Open Futurity on Peanuts Kids for owner Claudia Klucsarits of Austria. Robin and Peanuts Kid went on to place sixth in the NRHA Limited Open Futurity and were also Intermediate Open futurity finalists. In 2006, Robin showed Peptoleap for owner John Thompson at the Congress and captured the limited open ancillary class championship. But where Robin really excelled was in training and showing futurity and derby horses, and in 2007, he once again captured the Congress Limited Open Futurity Championship, this time aboard Wimpys Pinesail owned by Charley Vaughan of Lafayette, Indiana. He went on to pilot the mare by Wimpys Little Step and out of Vaughan’s prized broodmare Pinesail to the NRHA Futurity Limited Open Championship and also qualified for the intermediate open futurity finals for the second time. 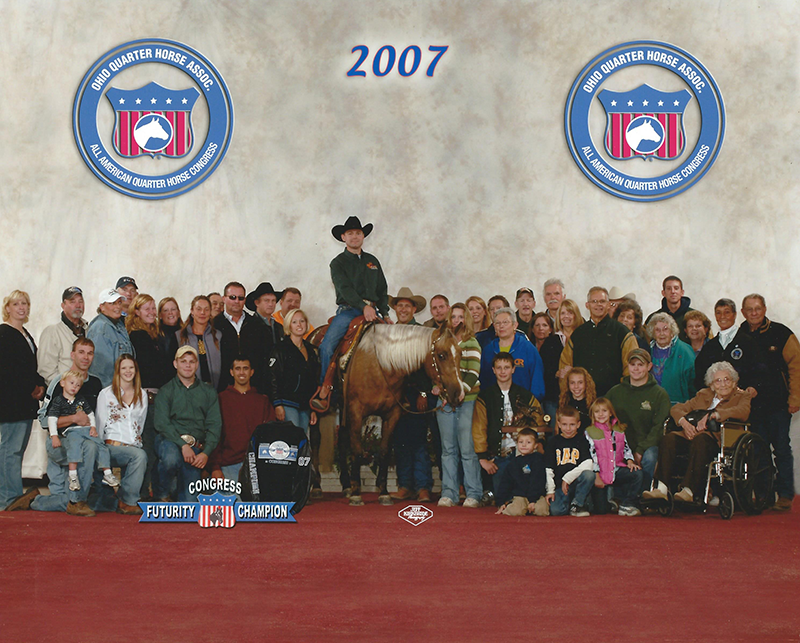 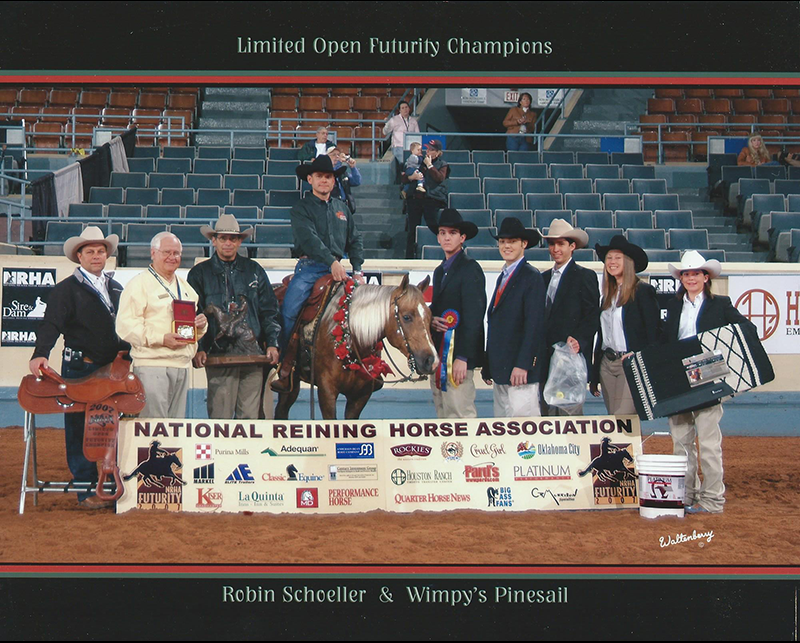 2007 was also a good year for Robin on a personal level. In addition to competing in the open divisions, Robin also coached some youth kids to much success. Joining forces with other kids at the shows, the youth all made it their mission to find Robin’s ‘soul mate’. And by the end of the summer, they did just that as Robin and Laura (Phillips), who also competed in the open divisions and coached many youth and non pros to world championship titles, began dating.

Robin continued to excel in Flarida’s program, so in 2008 Shawn gave Robin the opportunity to show past NRHA Open Futurity Champion KR Lil Conquistador at the National Reining Breeders Classic (NRBC). And Robin didn’t disappoint as he and KR won the NRBC Intermediate Open Derby Co-Championship. This also marked the first time for Robin to qualify for the level 4 finals at the NRBC! In 2009, Robin and Laura were married and Robin soon realized he was ready to start out on his own. Reining horse breeders and non pro competitors Bill and Gloria Bradley offered Robin the opportunity to train out of their Mt. Sterling, KY facility, so Robin and Laura moved to Kentucky to strike out on their own. At the Bradley’s Robin continued to compete as he built his own customer base and began to grow their business. But Ohio had become Robin and Laura’s true home so a year later, they moved north again to Bob Rosenfeld’s Roseland Farms where they continue to operate out of today. Robin also enjoys being back within a close vicinity to Shawn who continues to be an invaluable mentor and friend both on and off the track. 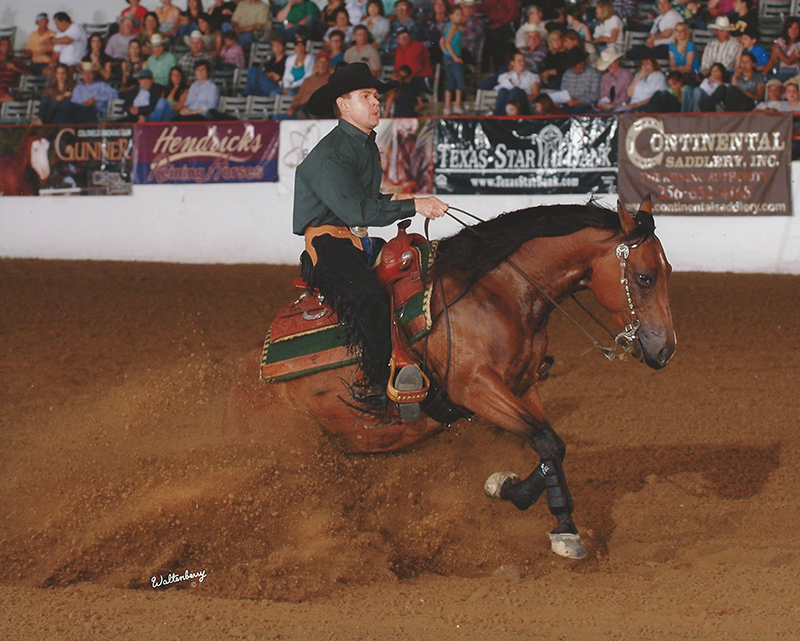 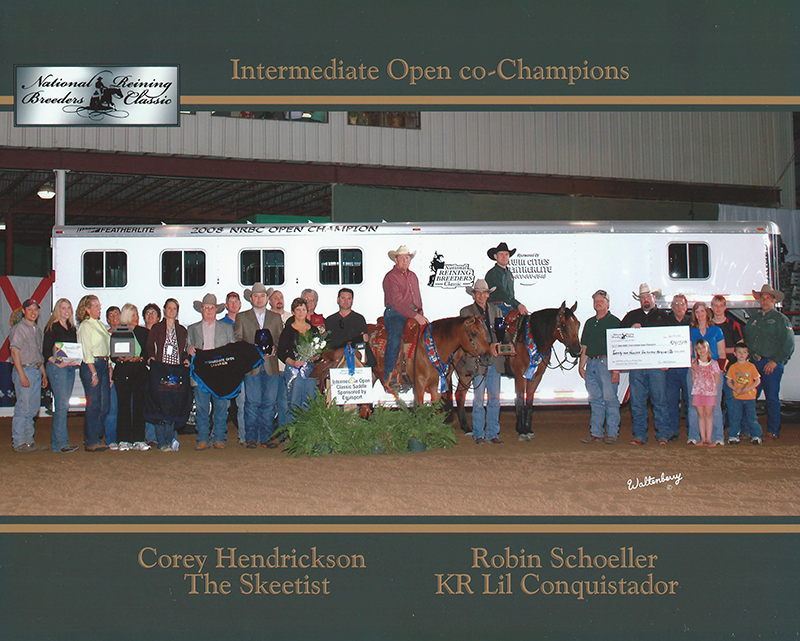 2012 proved to be another big year for Robin as he piloted Beth Himes’ Miz Whizconsin to the levels 2, 3 and 4 NRHA Open Derby finals. And the success for Robin and Beth continued as he showed her gelding WLS Tinseltown to the Congress Limited Open Futurity Championship and Intermediate Open Co-Championship. They also went on to become NRHA Futurity level 2 and 3 finalists. 2012 was also a memorable year for Robin and Laura outside the show pen as they welcomed the arrival of their daughter, Janna Maria in August.

With the help and support from Laura to make Robin Schoeller Reining Horses a true success, Robin has continued to be a consistent level 3 and 4 finalist at every major event. In 2013 and 2014, Robin continued his success in the show arena aboard WLS Tinseltown and was a consistent finalist on Smart Tinseltown, also owned by Beth and Made By Magnum, owned by Lyndsey Jordan. With more than $500,000 in NRHA Lifetime earnings, he continues to learn and hone his skills as he strives to help each horse he trains and shows to reach their true potential. But, it’s not just inside the show arena where Robin has found success. Coaching many youth and non pro clients over the years, Robin has also proven to be a top notch coach. After showing Made By Magnum and qualifying for the Congress and NRHA Futurity Finals, Robin turned the reins over to Lyndsey in 2014 as he helped her to capture the NRHA Non Pro Derby Championship in levels 2 and 3 and the level 4 Co-Championship. No matter whether it’s in the show pen or on the track at home, Robin works each and every day to help every horse, owner and rider achieve their goals as they continue to have fun and enjoy the wonderful sport of reining. 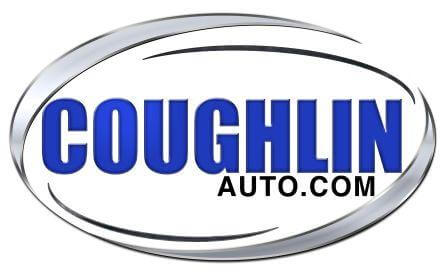 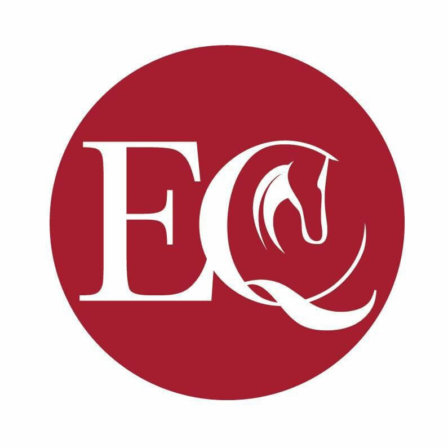